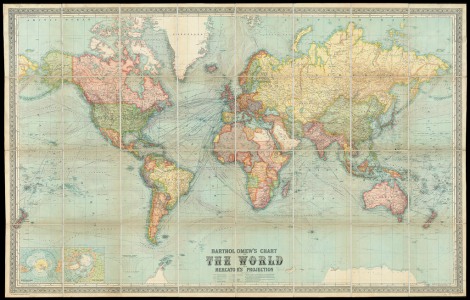 The integrals of the six basic trigonometric functions are foundational results in calculus. Results for sine and cosine predate Newton but were placed on rigorous foundations by him and his method of power series in 1669. The integrals of tangent and cotangent are similarly straightforward. In the style of Liebniz, we might write

(We do most things in the style of Liebniz, frankly.)

The integral formulas for secant and cosecant are a bit more notorious. The integral of secant, in particular, has a fascinating history which begins with the Mercator projection. This projection, introduced by the Flemish cartographer Gerardus Mercator in 1569, is conformal, meaning it preserves angles (ie. compass bearings, or plumb lines). This is great for navigation but comes with an iron price: the Mercator projection famously distorts the relative sizes of land masses.

This area distortion is two-fold: a horizontal stretch as well as a vertical one. For the vertical stretch, one may show that the distance

from the equator to the parallel at latitude

This integral was numerically computed and tabulated by Edward Wright in 1599. In 1640, Henry Bond compared Wright’s table to a table of logarithms of the tangent function (yes, these used to exist) and made the conjecture

This conjecture grew famous, and was known by Newton by 1665. (The modern reader can verify this conjecture using the Fundamental Theorem of Calculus, which was not known back in 1640.) The formula above was finally proven in 1668 by James Gregory, although the first modern/intelligible proof came from Isaac Barrow in 1670.

From this point, double angle formulas can prove that our formula matches the conjecture of Bond.

where the substitution is

. This proof is entirely artificial: no one would make this substitution unless they knew the answer already.

I speculate that the integral of secant is front-loaded into calculus curricula as a way to treat trigonometric integrals (integrals of products of trigonometric functions) and trigonometric substitution before the introduction of partial fraction decomposition. Historically, these developed in the other order, and I’m not aware of a compelling reason to switch them.

Proof: Since the double angle formula for sine inverts better than that for cosine, we treat the integral of cosecant instead of secant. As co-functions, we may pass easily between the two. We have

Most calculus books teach trigonometric integrals in two parts: integrals of functions of the form

, and integrals of functions of the form

. Leaving our integral in terms of sines and cosines requires partial fractions. Converting to secants and tangents gives

can be used to derive the integral formula for secant in the style of Bond’s conjecture.

in two ways: once using the trig substitution

, it follows by the quadratic formula that

, and the general formula follows from functional equations of secant.

It’s worth pointing out that there is nothing particularly special about the hyperbolic trigonometric functions used in this proof. Any implicit substitution we take of the form

would suffice to give

, and inverting the relation in

You have stumbled upon the personal blog of Alex Walker. I am a number theorist and a Heilbronn fellow at UCL.